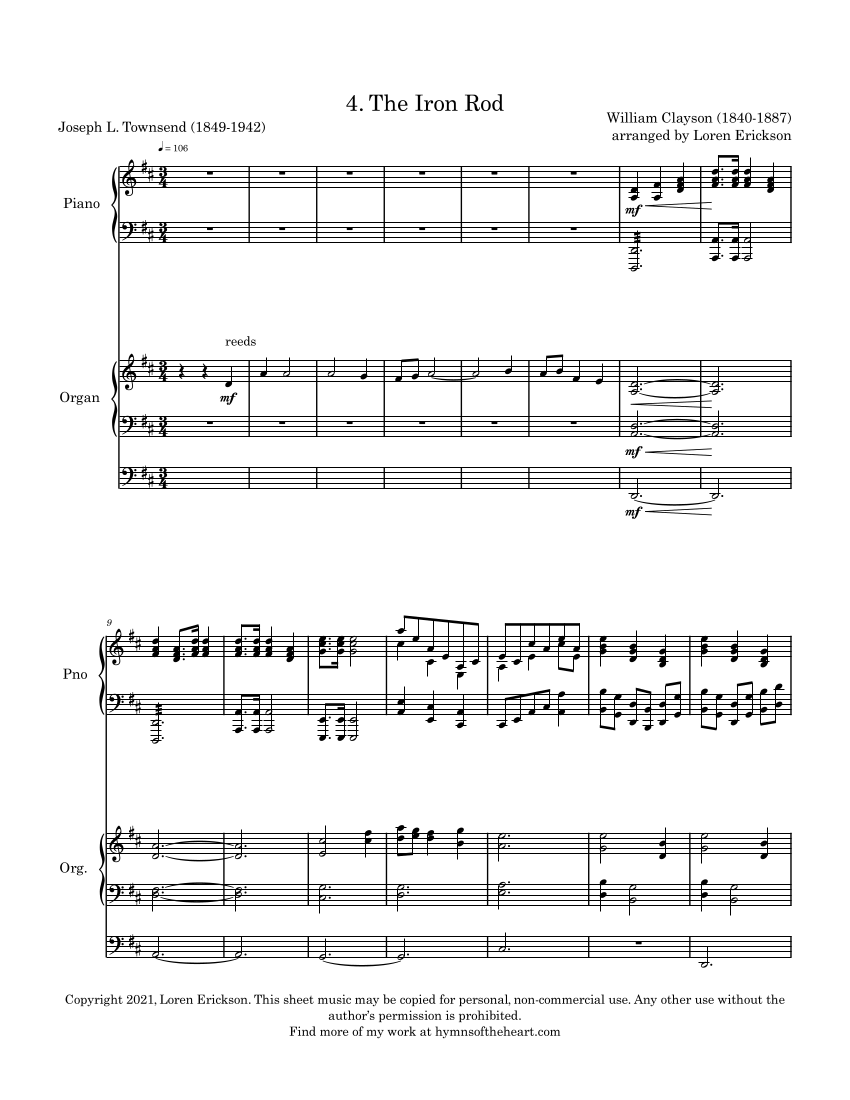 "The Iron Rod" is a rousing, perhaps rowdy, arrangement of the primary song beloved by many generations. The lyricist Joseph Townsend passed from mortality in 1942, and the composer, William Clayson, preceded Brother Townsend by almost sixty years, passing in 1887. It's hard to believe that such a powerful expression of the blessing of the Book of Mormon has been around for more than 100 years. I loved this song as a primary child, and I love it today.

I chose this hymn as the basis for the first song in the second act of my ortatio about the life of the Prophet Joseph Smith, called simply "The Restoration". As I've said elsewhere I enjoy music that doesn't shy away from the challenges of mortality, and this is a classic example of one of those. If you consider the words of the second version out of context, "beneath temptation's power, thorugh mists of darkness we must go...", it paints a pretty bleak picture. But as illustated in Lehi's vision, those who "hold, hold, hold" fast to the iron rod (the word of God) will reach "the golden rest" and "with the Saints abide".

This is arranged for a large adult choir (SSAATTBB) and a large youth choir (SATB), with organ and piano accompaniment.

Separate choral and accommaniment parts are avaialble on request.

"The Restoration" is a 12-movement work I began working on in 2017. It depicts the life of the prophet Joseph Smith from just before his vision of God, the Father, and Jesus Christ to his martyrdom at the hands of a mob at Carthage jail. It is split into four acts aligned with specific themes from the prophet's life, described loosely as: Awakening, Restoration, Persecution and Testimony. Each act contains three songs. The second act, Restoration, describes specific things that the prophet restored, namely a second witness of Jesus Christ as recorded in the Book of Mormon, the Aaronic priesthood authority, and the Melchizedek priesthood authority. This work, The Iron Rod, is the first song in the second act, and is a reduction of a full orchestration.

When completed, fully orchestrated verison of the "The Restoration" will be released as a single volume, with the full score, instrumental and choral parts. If you have further interest in this work, please drop me a line using the feedback form on this site.

All works on this site are Copyright 2020, Loren Erickson. Except where noted otherwise, they are freely licensed for use at home, in church services, or any non-commercial setting. They may not be redistributed, included in compilations, or sold for any purpose without explicit written permission from me.

If you are interested in other uses of my work please drop me a note using the feedback form.

If you like what you find here and are interested in contracting me for an arrangement or original work, I'm always looking for new projects.